Vivo Pizza Ipoh opened over a month ago at AEON Station 18. I wanted to write this sooner but well… it’s kind of painful as that day is a reminder of something I don’t want to be reminded of. It was supposed to be a good day but ended up a very devastating day instead. I almost didn’t want to go but I thought I needed fattening food and my free pizza to ‘drown‘ my sorrow.

I reached at about 9 pm-ish, which was already late and it was drizzling that night. Didn’t take long to find the restaurant. It was at restaurant street, the first restaurant you’d see after the food court, next to Wendy’s and opposite of Orchid Bistro (check out my Orchid Bistro review)

I saw my friend facebook status all excited about Vivo Pizza Ipoh about to open soon. Then I found out they were having a giveaway, and the 30 lucky winners will receive a free pizza on the opening day. So I thought I’d just leave a comment. I was genuinely excited as I haven’t had Vivo Pizza in years.

My friend was the first person to win. I was quite jealous haha. I thought I couldn’t win, and I’ve actually forgotten about it until, if I’m not mistaken, my friend mentioned me. Then when I checked it out, I saw my name as the winner. I was number 29th! That was very close! Almost didn’t make it. 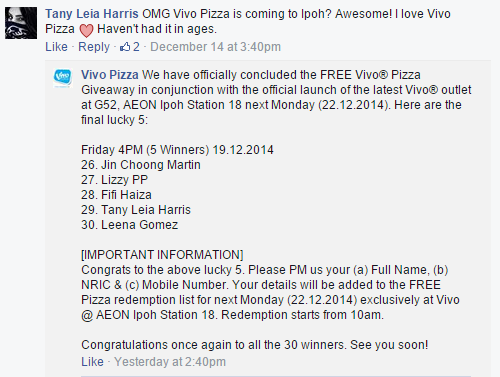 I was pleasantly surprised to see how nice the interior of the restaurant is. The interior is warm and cozy, with bright yellow-ish hue alternating with beige. The plush seating and decor adds a touch of class.

It’s not your normal pizza parlor like Pizza Hut or Domino’s. It looks like as if you’re about to have is a fine dining experience. 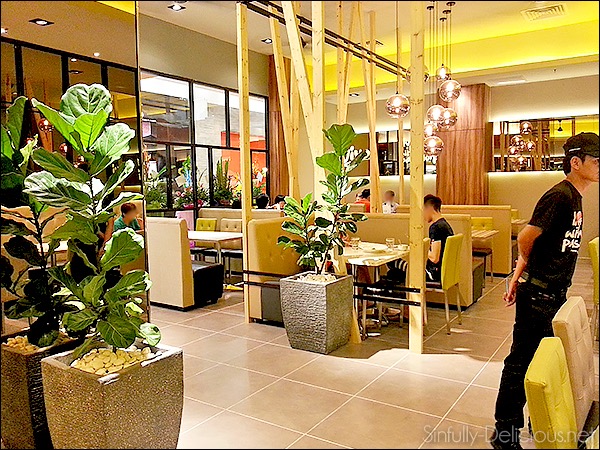 There weren’t a lot of people there as it was almost closing time. If I remember correctly, they mentioned to me their last order is at 10 pm, which is a standard time as they close at 10.30 pm. I was greeted by the friendly waiter and they ushered me to my table.

The waiter then showed me the check list to find my name. I saw quite a number of winners didn’t claim their free pizza. What a waste… 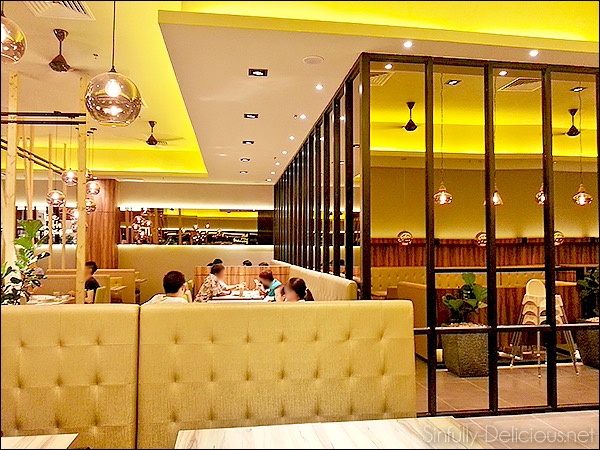 As mentioned earlier in this post, I was terribly depressed and needed some fattening food. So I decided to order something. They don’t only have a variety of pizza, but they’re also known for their panini. There’s also a wide variety of other dishes, desserts etc. I decided to go for pasta so I ordered Carbonara Linguine. 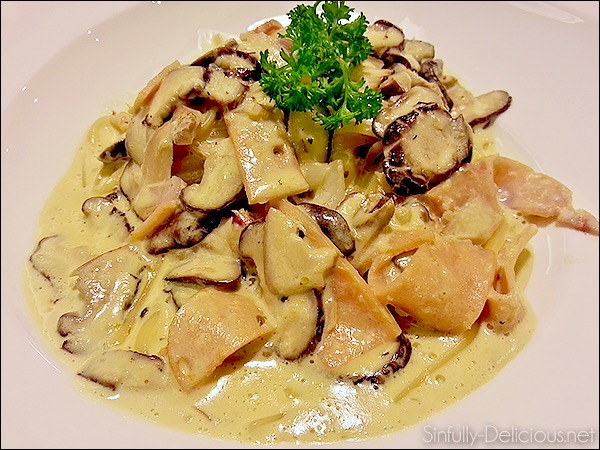 The price is a bit steep for me, so it’s not something I’d normally order on regular basis. But carbonara is my absolute favorite. I just love the rich, creamy taste. The creamier the better. It’s a perfect fattening dish to drown my sorrow. I just had to have it.
But I didn’t expect how big the plate would be when it arrived on my table! The plate was not the standard normal plate. It was huge, heavy and lopsided. Yes, the plate was unsymmetrical. It was actually quite interesting.

The carbonara linguine was HEAVEN. I swear I thought I died and went to food heaven. It was absolutely divine. The sauce was very rich, creamy, thick and perfectly seasoned. And what surprised me the most was the generous amount of chicken strips and huge mushroom slices, two of my most favorite ingredients. Definitely the perfect dish for me. Seriously, it was that damn good.

However, it’s NOT recommended for those watching their figure, obviously. Also not recommended for small eater. I don’t know if it was because I was too depressed but I actually had a hard time finishing it and that’s a first for me. I’m going to go again one day but with an empty stomach. Might have to fast the day before.

For 20 bucks, it was very worth it. I just hope they’re consistent and retain the standard of their food the next time I revisit the restaurant. 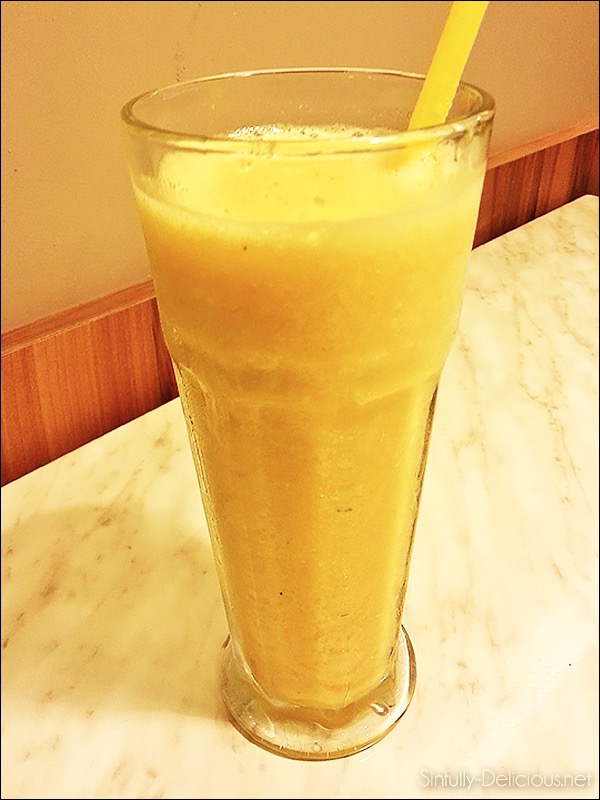 For the drink, I decided to choose ‘Banarama‘, which is, according to them and I quote, “Get your hi-energy fix of banana & orange fusion packed with potassium, carbohydrates & folate for better stamina, muscles & nerve functions”.

Yup, it’s banana and orange blended together to create this refreshing juice. It was quite sour from the orange, not too sweet, a subtle banana taste and yes, it was definitely refreshing. It was a perfect choice of drink since I had a very creamy pasta. 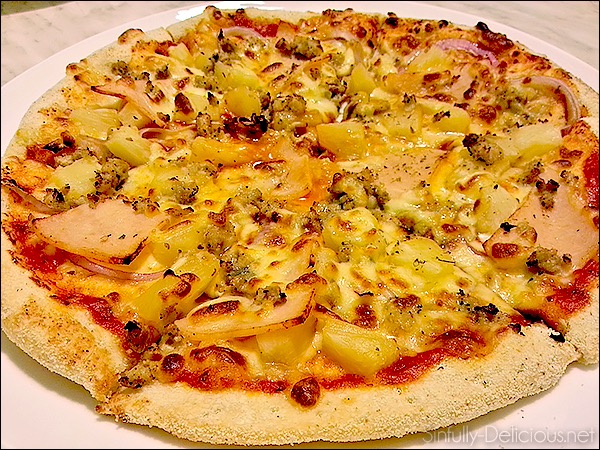 And then, my free 11″ regular pizza! I chose ‘Hawaii‘ because I was with my mom, and it’s the only kind she likes. They have many other sinfully delicious kinds/toppings and it was very difficult to just pick one. 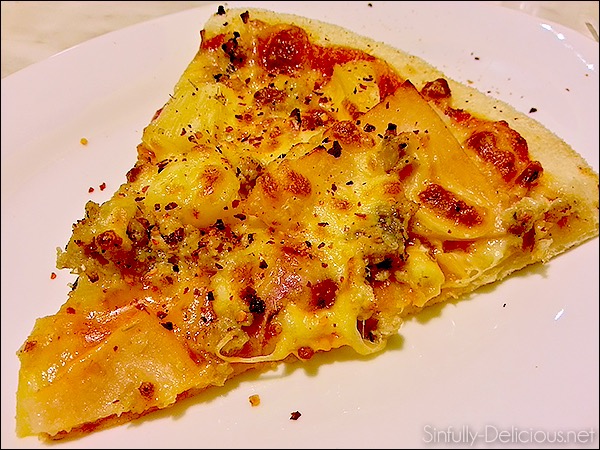 I only had a slice there, because I was already too full from the pasta. It was absolutely yummy. I seriously love their pizza. It’s not too thick, not too thin, soft yet not too crispy or tough, with generous amount of ingredients. It was just perfect for me. I sprinkled some chilli flakes for added ‘kick’.

When it comes to pizza, I seriously don’t like the thick crust pizza. I prefer the new york style, and only Domino’s have that kind of crust. Unfortunately, they seriously do NOT know how to make a thin, soft, pizza. Instead, they always overcook it, making it too crispy then so tough to eat when cold. It’s like eating a brick and unfortunately for a few times, inedible. Reheating it would make it worse.

Vivo’s Pizza however, even when I ate the leftover hours later at home, it was still soft just like it was when it just arrived at my table in the restaurant, only cold instead of hot and I didn’t even have to reheat it. 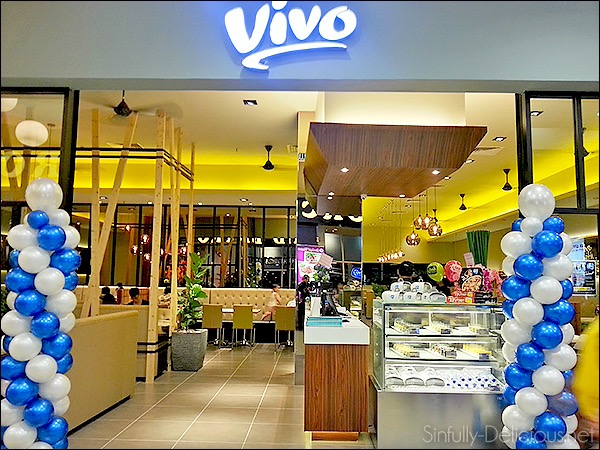 Only regret is leaving the place a bit too late. When the mall closes at 10.30 pm, they REALLY close everything at 10.30pm. It includes every doors and elevators and areas. It was a big mistake leaving my car parked on the 3rd floor because there was only 1 door open at the other end of the mall. I actually got lost for a while. Why couldn’t they leave the areas, elevators and doors open for at least 10 minutes after closing time? An old lady had to walk a LONG way because we couldn’t find the car.

Anyway, Vivo Pizza was really awesome, I had a great dining experience despite being depressed, the place was really comfortable, the posh interior was really nice and cozy and the staff were friendly and courteous. I hope they keep up the good quality and service and don’t change the food. I wouldn’t like my pasta super dry *coughs*pizzahutpasta*coughs*

And thank you for the free pizza, Vivo Pizza Ipoh!